For this assignment you will need a pair of anaglyph (two-color) 3D glasses. Note that the polarized glasses used in movie theaters will not work for this assignment. You need either a pair of glasses with red/cyan or with green/magenta colored filters. If you haven't already received a pair then you can pick them up from the Physics Department office (Science Bldg., Room 148). You can also get 3D glasses from me during office hours (Thurs., 1-2pm, Science Bldg., Room 245).

In this assignment you will create anaglyph (two-color) stereoscopic images. In brief, these images are created by taking two photographs, taken from slightly different perspectives, and combining them into a single image using image processing software, such as Photoshop.

To create a pair of images to be combined into a single 3D image, start by taking a photo, then move 2-3 inches to the right, take a second photo. Be careful when taking the second photo to only shift horizonatally,avoiding any rotation of the camera. Also avoid having objects closer than a yard away from the camera and be absolutely sure that there are no moving objects!

Optional: You can also create a pair of stereo-ready images in Autodesk Maya by rendering a scene for one image, then shifting the camera position and rendering the second image.

There are a variety of software tools that allow you to combine a pair of images into a stereoscopic anaglyph image; here is how to do it in Photoshop (Note that a 30-day trial version of Photoshop may be downloaded from the Adobe website.) 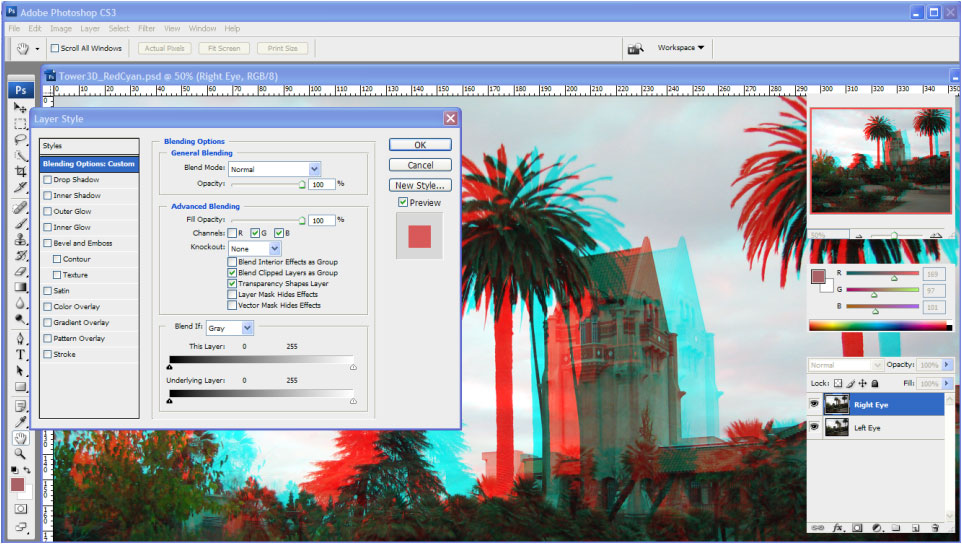 1) Open both images in PhotoShop. Hold the shift key and drag the second photo (right eye image) on top of the first photo (left eye image).

2) Rename the layers “Right Eye” and “Left Eye”; make sure the Right Eye layer is on top.

3) Double click the Right Eye thumbnail to open the Blending Window. In Advanced Blending uncheck the Red Channel for Red/Cyan glasses or the Green Channel for Green/Magenta glasses. Put on the appropriate glasses to verify that the image is stereoscopic.

4) Save image as JPEG using "Save for Web & Devices" in the File menu.

Here's a tip for improving your 3D photos: Select one of the two layers and shift that image around until the object in the photo that you wish to appear at screen depth is aligned in the two photos. You can also try rotating the image by a degree or two to tweak the stereoscopic effect. Wear your anaglyph (colored) glasses and allow your eyes a chance to refocus while making adjustments.

For this assignment you should create at least three different stereoscopic images. For each image please indicate the anaglyph color pair (either Red/Cyan or Green/Magenta).

Here are some examples from previous semesters:

Optional Bonus Points: Create a 3D image in Maya. Up to 10 bonus points.

Optional Bonus Points: Create a 3D animated short, either by stop motion or in Maya. Up to 20 bonus points for a good animation.

If you do extra work for bonus points then just put everything into a single blog posting. Bonus points will not be awarded if the assignment is turned in late.

Have a question? Go here.

Find Rubric
Keep in mind that 46 students have already been assessed using this rubric. Changing it will affect their evaluations.
Stereoscopic Images
You've already rated students with this rubric. Any major changes could affect their assessment results.
Additional Comments: